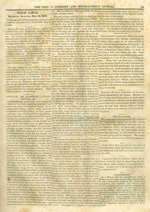 Since its publication in 1830, the Book of Mormon has been cast in a variety of roles by both Latter-day Saint and non–Latter-day Saint readers. Published literature relating to the book that appeared during the Prophet Joseph Smith’s lifetime is one of the best historical windows for understanding how this ancient American scripture was interpreted, used, and understood by early readers. This collection represents an effort to gather together that body of literature and make it available to those interested in the origins of the Book of Mormon.

Compiled and Edited by

Published by the Neal A. Maxwell Institute for Religious Scholarship,
Brigham Young University; © 2010