On June 20, 2001, representatives of The Catholic University of America, Brigham Young University’s Neal A. Maxwell Institute for Religious Scholarship, and Beth Mardutho: The Syriac Institute met together to discuss the digital imaging of key holdings in the Semitics/ICOR Library of CUA’s Mullen Library. CUA’s Semitics/ICOR Library houses one of the largest collections in the world of early and rare books on the Christian East. The convened parties shared a particular interest in early Syriac printed works, both for their continuing value to contemporary Syrian Christian communities as well as to Syriac scholars. Many early printed catalogs, text editions, grammars, lexica, and other instrumenta and studies have never been superseded. Their rarity and inaccessibility to scholars has long been a serious problem for the field of Early Christian Studies.

The faculty and staff of Catholic University recognized this need as well and generously agreed to work with BYU and Beth Mardutho to provide digital access to their collection. BYU and Beth Mardutho entered into a three-way agreement with CUA to scan a broad selection of their Syriac book holdings, with BYU focusing on titles of the highest academic interest and Beth Mardutho on materials of most interest to the Syrian churches.

However, two immediate problems would have to be solved. The first was the relative inaccessibility of the collection. The Semitics/ICOR Library houses some 45,000 books and periodicals, 20,000 of which were the bequest of CUA’s first great Semitist and orientalist, Prof. Henri Hyvernat (1858–1941). 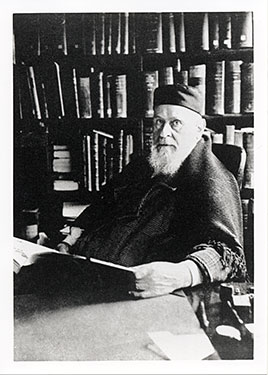 Henri Hyvernat reading in his research library ca. 1937-38, now the Semitics/ICOR Library at the Catholic University of America. Much of the cataloging of these early works has never been migrated to computer, and many early Syriac titles had never been cataloged at all. Fr. Matthew Streett, a doctoral candidate in Biblical Studies at CUA, was appointed Project Bibliographer and compiled a 400 page bibliography of Syriac materials in the CUA collections. With this finding aid in hand, BYU and CUA collaborated with Dr. David Taylor (University Lecturer in Aramaic and Syriac, University of Oxford) to determine what items were of the highest academic value and should be targeted by the project.

The second problem was that the Mullen Library was being renovated and workspace would be hard to find. Fortunately, a suitable space became available in 2004 which permitted imaging operations from March-August of that year. There were two imaging teams, one each from BYU and Beth Mardutho, who worked under the direction of the Semitics/ICOR curator, Dr. Monica Blanchard.

A staff of 15 technicians was assembled from the CUA Libraries, the School of Library and Information Science, and from graduate academic departments and programs with an interest in Syriac (Semitics, Early Christian Studies, Biblical Studies, Medieval and Byzantine Studies). Volunteers from the Syriac Church communities also helped. Technicians with Syriac and Arabic language skills entered metadata information in Arabic and Syriac into the Beth Mardutho metadata database; they also dealt with pagination and bibliographic issues in these languages. Technicians with library skills worked with fragile and valuable materials requiring special handling. All the student technicians had good computer skills and an eye for detail—these proved to be the most important job assets. Two of the technicians, Jonathan Loopstra (for Beth Mardutho) and Diana Jill Kirby (for BYU), served as quality assurance heads. Both had previous quality assurance experience. The CUA team established work flow patterns and scanning procedures for the project.1

Imaging for BYU was done with a Zeutschel Omniscan 10000 TT color book scanner tethered to a Windows PC, with a second PC used for proofing and data backup on DVD. The Zeutschel book scanner is capable of producing very high resolution scans with high color accuracy, yet with a minimum of stress to the book or manuscript. Images were captured at 600dpi in 24-bit color.

A total of 667 books, articles, and other media were scanned by the two teams. The images scanned for BYU were returned to BYU’s Harold B. Lee library and turned over to specialists in the L. Tom Perry Special Collections imaging lab. There the more than 30,000 images were individual split and cropped, straightened, renamed, resized, sharpened, converted to PDF and tagged with metadata. Indexing hierarchies were created and the images are being distributed via the Internet using CONTENTdm digital collection management software. The images scanned by Beth Mardutho are also being published on the Web, as part of its eBeth Arké project. 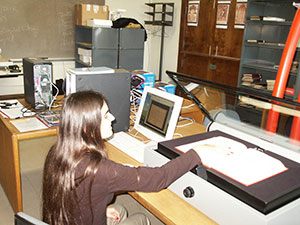 While the BYU-CUA Syriac Studies Reference Library has been made possible though the dedication of many people, we would like to single out for acknowledgement the support of Adele Chwalek, former Director of Libraries, CUA; Randy J. Olsen, University Librarian, BYU; and most especially we recognize the exceptional labors of Monica Blanchard, Curator, Semitics/ICOR Collections, CUA.

Monica J. Blanchard, “Digitization of Syriac Books and Other Holdings at The Catholic University of America,” Hugoye 8.1 (January 2005), http://syrcom.cua.edu/Hugoye/Vol8No1/HV8N1PRBlanchard.html

1Monica J. Blanchard, “Digitization of Syriac Books and Other Holdings at The Catholic University of America,” Hugoye 8.1 (January 2005), par. 7 (http://syrcom.cua.edu/Hugoye/Vol8No1/HV8N1PRBlanchard.html)