The Collection and its History

George Edward Anderson’s photographic collection reflects his lifelong commitment to his photography and his religion. The photographs taken over his career, spanning 1878–1928, demonstrate his artistry with a camera and his perfectionism. Both studio and environmental portraits of Utah residents are available in the thousands. Never a pure landscape photographer, Anderson’s collection of glass plate negatives contains something of railroad history, mining, LDS temple building, and LDS historic sites. Unfortunately most of the negatives from his experiences in Canada seem to be lost, and almost none of his mission to England and his Arizona experiences have been found to date.

It was thought that there were 30,000 glass plate negatives in his collection at the time of his death. Less than six months later, two Provo Seminary teachers offered to buy this enormous collection from Anderson’s widow, Olive. Their interest presumably was in Anderson’s views of Church Historical sites which they intended to use as visual aids in their teaching. They were willing to pay $2,500 for all of the negatives.

A life long friend of the Andersons, John F. Bennett of Bennett Paint and Glass (who, along with Anderson, apprenticed with photographer C. R. Savage), became aware of the offer and felt that the collection would be of greater use in the possession of the Church Historians Office where “they could be used for all seminary purposes, said Bennett.” It seems he became the self appointed agent for Olive Anderson and eventually a successful arrangement was made in which the Church paid $2,500 for Anderson’s negatives and photographic equipment, matching the offer of the LDS Seminary teachers.1 Junius F. Wells had previously been appointed by the Church to transfer Anderson’s collection from Springville to Salt Lake City."2

In December 1928 Wells wrote a letter to the Church Historian, Joseph Fielding Smith, expressing his estimation of the value of the Anderson collection and outlining some of the procedures that would be used to preserve it and make it more available. He outlined the role of the Utah Photo Materials Company, employed to make prints of many of the negatives. "The remainder of the negatives, Brother Bennett has undertaken to have brought up and put in the hands of the…firm for like treatment," Wells reported to Smith. "When they are finally listed, and albums of specimen prints deposited in the Historian’s Office, it will be realized that a very important and valuable, as well as beautiful contribution has been made to the photographic collections of historic places and persons, being assembled for preservation there."3 In the same letter it becomes clear that the acquisition of the collection and the price of $2,500 were agreed upon at the highest levels of the LDS Church. Wells indicates that the price was negotiated with President Heber J. Grant and John F. Bennett on behalf of Olive Anderson.4

The transfer of the entire collection of negatives seems to have been extended over some time, but by August 1930 the Church had obtained possession of all of the Anderson negatives as attested to by Lowry Anderson, "Ed" Anderson’s son, in a letter addressed to Joseph Fielding Smith, the Church Historian.5

Beyond the numbering and listing Wells mentioned in his letter, about the processing and handling of the collection, there is little information until the 1960s. The exact number of negatives in the collection at the time of purchase by the Church is uncertain. The Church Archives catalog record for the collection indicates that approximately 30,000 negatives were in the original purchase, but only 18,941 negatives were numbered and identified during the ’60s by Church employees in preparation for microfilming the entire collection. The negatives and typed indexes were filmed onto 20 reels of 35mm microfilm. With a collection this large the difference between the estimated 30,000 photos and the almost 19,000 images indexed could have been merely an estimation error in the original acquisition number.

After microfilming, the LDS Church Archives made the decision to destroy the glass plate negatives, with the exception of the 444 plates that dealt primarily with Church historical scenes. An undetermined number of the negatives were destroyed before one employee, Druscilla Powell Smith, obtained permission to salvage the remaining plates. Some of the plates were sold to individual families, some to collectors of railroad photographs and a large number, about 6,000, were given to Smith’s friend who lived in Carbon County. These plates consisted of individuals and scenes of the county and were used for genealogical purposes. Still, another large group of plates, about 8,700, went from person to person until they came into the possession of Rell G. Francis, who later became Anderson’s biographer and curator of several exhibits of Anderson’s works, in addition to establishing a shop where he sold prints to interested historians and descendents of the photographic subjects. 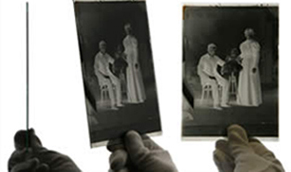 L. Tom Perry Special Collections in the Harold B. Lee Library obtained its first Anderson negatives in 1974 with a donation by Druscilla Powell Smith of two boxes of glass plate negatives. This gift was followed in 1976 by the donation of the plates that were sent to Carbon County. From 1990-93 the glass plates that were in the possession of Rell G. Francis were acquired by the Lee library. In 2005 some 270 glass plates were donated by the widow of Robert Edwards, a collector of railroad photographs and memorabilia. The donation of the Carbon County plates and the acquisition of the Francis plates comprise the bulk of the Lee Library’s collection of Anderson glass plate negatives.

In May 2005, the Harold B. Lee Library received a Library Services Technology Act grant of $88,350 to complete the processing and digitization of the entire George Edward Anderson glass plate negative collection and make it available on the Internet by September 2006. The Lee Library expresses its deep appreciation to the Utah State Library for its confidence in the library’s professional expertise in making this available on the web, and their knowledge of the deep and abiding value of this collection. As a part of the grant process, the Lee Library is contributing $55,650 in matching funds to the completion of this project.

The process of organizing, describing, digitizing, and posting the collection on the Internet is time consuming and labor intensive as those working on the project have chosen to scan every single image. The steps in this process are as follows:

Other steps in the process include the creation of a website with its various search queries, a biographical sketch of George Edward Anderson, a list of further readings to learn more about him, and information about the collection.