The collection of French Political Pamphlets in the L. Tom Perry Special Collections (LTPSC) at Brigham Young University features more than 2,400 pamphlets published between 1547 and 1626. This extensive collection will provide a depth of material that will serve students of French history for a long time to come.

For purposes of understanding the scope of the collection of French pamphlets at BYU, it can be subdivided in the following manner, roughly according to the years of the reign of the various kings:

The pamphlets published during the reign of Louis XIII can be subdivided in further detail:

The major bibliography of French political pamphlets located in repositories in the United States is the work compiled by Robert O. Lindsay and John Neu, French Political Pamphlets, 1547-1648: A Catalog of Major Collections in American Libraries. In 1969, Lindsay and Neu completed an exhaustive survey of twelve libraries (though not including BYU’s Lee Library) and 3905 pamphlets, many of which are variants, i.e. the same title published in another location or with different pagination. It is interesting to note that BYU owns approximately 670 pamphlets that are not listed in Lindsay and Neu.

In his 1990 publication entitled Printed Poison: Pamphlet Propaganda, Faction Politics, and the Public Sphere in Early Seventeenth Century France, Jeffrey Sawyer makes the observation that with a run of between 500 and 1200 pamphlets per printing, even the most popular pamphlets might have reached the hands of only 1% of France’s urban population. This 1% of the population, however, must have been a very influential 1%. To either own a press, or to hire a printer, must have taken a considerable amount of resources and constituted a significant investment on the part of the authors of the pamphlets. 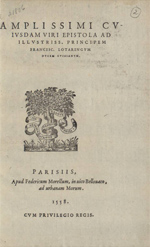 Pamphlets were usually printed on a single sheet of inexpensive paper, printed on both sides and folded three times. They were usually sixteen, twenty-four, or thirty-two pages in length. The most common types of pamphlets were official documents, often with titles that began with these words: declarations; ordonnances; edits; lettres patentes; articles, avis, or remonstrances. In addition, there were letters, discourses, and certain literary pieces. It is true that the preponderance of pamphlet literature addressed the central political issues of the period. Official government entities, such as the King or the Parlements, published 60-75% of the pamphlet literature. Private authors with a religious or political cause published the rest. Seen as whole, the entire corpus of French pamphleteering during the latter part of the 16th century and the first half of the 17th century gives us a glimpse into the political, social, and indeed, literary life in France because these pamphlets served the purpose of disseminating information and propaganda all at the same time.

As one reads these pamphlets — these libelles, if you will – one expects to find propaganda by and about the monarchy, the nobility, the wars of religion, scandals at the court and political intrigue. The scholar approaching the study of pamphlets published during these years will expect to find pamphlets with the themes of taxation, diplomacy, royal marriages, Huguenots, The Catholic League, The Thirty Years War, the Estates General, and the actions of government officials. All of these subjects can be found in depth in our collection.

But in addition to these normally expected topics, our collection possesses a breadth of many other fascinating topics for research. There are pamphlets that deal with regulations of all kinds: dress standards for the bourgeoisie, the state granaries and salt warehouses, marriage, divorce, the hostelries and tavern keepers, the guilds and the rights of workers, firearms, domestic servants, the importation and production of linen cloth, coinage, censorship, printing, and booksellers, to list a few. There are pamphlets that treat the judiciary, the officials for the royal forests, the threat of the Turks, the poor, the peasantry, the harvest, and even the Eucharist. In addition, many of the pamphlets treat predictions of the future, i.e. prophecies and horoscopes defined by the stars, eclipses and comets. 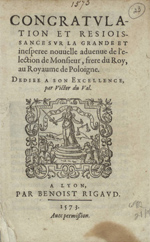 Let me illustrate with a description of a few of the most interesting, non-typical pamphlets found in our collection. In 1573, under the direction of King Charles IX an “Arrest” of the Parlement of Paris was published that regulated the dress of the bourgeoisie and the nobility. The “Arrest” prohibited the wearing of any ornaments, broadcloth, or linen cloth of gold or silver. It furthermore specified the prohibition of embroideries, lace, velours, satins, taffetas with gold or silver and decreed that any manufacturer or seller of such material would be fined.

It is interesting that Henri III published the same ordinance in 1585, as did Henri IV in 1601 and Louis XIII in 1617. I will leave it to historians to discover why all four of these kings were interested in regulating the dress standards of the bourgeoisie and the nobility. Was it because of a conservation of gold and silver? Was it because of the moral standards of the people becoming corrupted by their riches? I don’t know. Henry IV, however, gives a hint. In the 1601 pamphlet he observes that those who have less should conserve their funds in their own “coffres” and not wear it on their clothing. They should not show an envy of the rich by wearing what could be an inheritance for later generations. Furthermore, if the nobility has excess wealth, to the point that they can afford clothing adorned with gold and silver, perhaps they should use their means for the honor and service of the state. The study of social and cultural history has hardly been tapped for this period of time. These pamphlets provide a rich and wealthy resource for such study. (Pun intended.)

In addition to these historical approaches, one can also study linguistic and literary history. Hundreds of pamphlets in our collection are written in verse or employ literary devices of personification, allegory, epistolary literature, fictional characters and conversations. Many are written as political satires. Satire has long been a commonly used technique for the criticism of political events and social life. There are scores of pamphlets in our collection that employ satire as a rhetorical technique. Satire may be written either in prose or poetry and some of the most well written pamphlets of the time are satires. For instance, there several pamphlets published in 1622 in which the literary figure that was the vehicle for the satirical look at society was the “Accouchee.” The titles are as follows:

In these pamphlets, we the readers are allowed to eavesdrop on the cackle, the tittle- tattle, the gossip of a group of women who are invited to visit “L’Accouchee,” the woman in child bed who cannot visit others.

At the beginning of the pamphlet we are introduced to a sick woman who is given advice by two doctors. A young doctor prescribes some medicine for her and an older doctor tells her to visit an “Accouchee” in the company of other women, and to participate in the conversation, the gossip session. She finds that the medicine does not work but the visit to her young cousine does. After gossiping about government officials, taxes, religion, and domestic life, she leaves feeling better. She returns a second time (in another pamphlet) and resumes her delightful visit. She muses to herself that if she feels as good as she did with the first visit, that a second will help her progress even more. And so it goes, through three visits. We should all, perhaps, seek the company of others when we are feeling down and discouraged. This is one level of interaction with these three pamphlets. Another level, of course, is the study of life in 1622 and the topics of gossip and conversation in which this “caquet” of women find themselves. 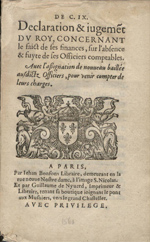 Scholars can approach these pamphlets in a variety of ways, studying a variety of rhetorical techniques: monologues, dialogues, recitations, parodies, satire, allegories, music, and imitations. In fact, in his book Printed Poison, Jeffrey Sawyer encourages scholars to further study the “relationship of pamphlet discourse to belles-lettres in the seventeenth century.” He suggests that a “more complete investigation of the links between satirical pamphlets and the comic theater of the times would probably turn up some interesting relationships.”

In 2001, I assisted a student as she wrote a Master’s thesis on the concept of the honnete homme as portrayed in the early 17th century. This concept has usually been associated with mid and late seventeenth century French literature, but she demonstrated its precursors date to 1610-1617. She studied many of the pamphlets that we have in our collection and contrasted those that dealt with Henry IV and those that treated the Mareschal d’Ancre, or Concini, the Italian favorite of Marie de Medicis. She was able to show that the concept of the honnete homme, the ideal man of social success, actually did have its beginnings in the early 17th century. This unique approach to the scholarly use of French pamphlet literature demonstrated to me there is indeed a breadth and depth to such collections, whether they be in Provo, Utah, or at the Bibliothèque Nationale.

In short, the word “pamphlet” may be used differently in English than in French. In English, the word means only a brochure with a relatively few number of pages. In French, pamphlet retains the connotation of small, with few pages, but also indicates a more severe, libelous tone. Such is certainly true with many of these “libelles.” One can approach the study of 16th and 17th century France – and particularly the early part of the reign of Louis XIII, before Richelieu with his censorship laws – from many different viewpoints. Our hope is that this digital collection will facilitate and expand this study.